Last year our 14th July celebrations for the Fête Nationale seemed to go on for days, a stark contrast to this Covid-constricted year where nothing is as normal.

Ed had been playing the guitar at a live gig in Melle on 12th July, the street outside the kebab shop closed to traffic, a ‘stage’ at one end and tables and chairs filling the space at the other, where homemade burgers and chips were served all night to an appreciative crowd.

Our village has always held its buffet and disco on the evening of 13th, allowing plenty of opportunity for everyone to head off to neighbouring towns or villages to continue celebrating on the 14th. Having eaten well, laughed with friends and then danced the night away, I was particularly looking forward to the 14th.

First was a bit of clearing up, followed by an apéro with other community-spirited friends, timed to perfection just as the village bell struck midday. Then it was off to the bar over the road to help them celebrate their second anniversary of opening, with more food and music. Although it promised to be a good afternoon, I had to leave early to collect Adrian from Poitiers airport. He’d missed out so far, but with Ed’s flat empty, this gave us the perfect opportunity to enjoy a bit of big town celebrations for the first time.

As dusk began to fall, we headed to Poitiers Parc de Blossac where there was a free live music concert, followed by fireworks. Security was tight, with all bags being searched at the gates and a no alcohol policy strictly implemented. The refreshment tent sold only 0% beer or soft drinks, but it meant there was a friendly and family-focussed atmosphere in the crowd. We found ourselves a space and sat happily people-watching as we waited for the fireworks to begin, and boy were there plenty of people to watch. It didn’t take long before every bit of grass was occupied, and those trying to pick a route through the bodies had to watch for fingers, feet and children, as they found somewhere to squeeze into. For someone used to village life and events of around eighty people, suddenly being one of thousands was rather daunting. The fireworks were fantastic, set off in time to music played so loud the ground vibrated as well as the air from the explosions and light show overhead. It was an amazing experience, but we both agreed, not one we would be in a hurry to repeat as it was a bit of a sensory overload.

The morning of the 15th saw us at an outdoor café in Poitiers town centre enjoying a coffee and croissant, before we headed off for a bike ride and then enjoyed lunch at the most beautifully decorated Moroccan restaurant situated on the cobbled street of Grand’Rue. The interior is a riot of colours, mosaics and lights, a feast for the eyes as much as their tagine plat du jour is for the stomach.

We were back home to enjoy an afternoon bike ride on the 16th, for Adrian to catch up with the sunflower fields, followed by an evening of free live music in the local village of Pouissay. We met up with friends, folded our bikes, unfolded our tables, opened our picnic hampers and wine bottles and had a fab time. I’d even managed to carry a vase of flowers on the bike to decorate the table, and at the end of the evening we cycled home as the full moon was rising. These five days proved that whether in a big town like Poitiers, or just a small rural village, France certainly knows how to put on a show. It was community events like these, and the joie de vivre they give, that I feared we would miss out on in this extraordinary year.

This year Ed is with Pearl and her family, experiencing his first French family fête nationale celebrations and having a great time. With no village ‘do’ on the 13th in our calendar, we almost forgot about celebrating the 14th completely. We took the bikes out for a 43km ride in the afternoon, a warm and sunny ride that took us through fields of sunflowers, shady tunnels through woods, past an old cart reclining under a tree and stopping for a rest in a waist-high meadow, where I celebrated 2000km cycled so far this year. The evening ended perfectly with friends coming over for apéros in the garden, where the conversation and camaraderie certainly made up for partying we had missed out on.

Last night we ventured back to the village bar for our first music night post lockdown. The weather meant we could all safely distance in the garden and all the usual friendly faces were there, just the hugs and kisses that were missing. The music was lifting, we laughed, chatted and sang along, and it felt good, a small return to normal.

With many holiday makers from France and elsewhere hitting the west coast for their holidays, virus numbers are on the increase, even for us a little way inland. We still need to be cautious and although masks won’t be obligatory until 1st August, we don’t leave home without ours. 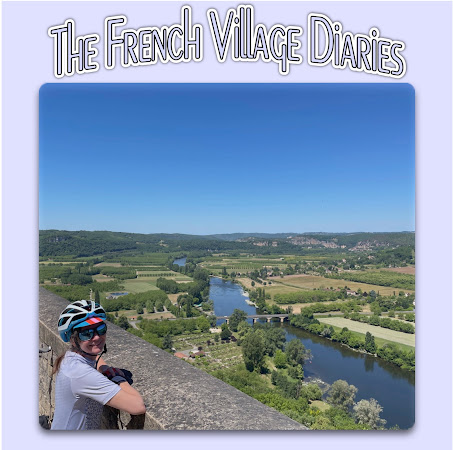